A little history of Little Venice

At the meeting point of Regent’s Canal and the Paddington arm of the Grand Union Canal, way back in the early 1800s, Little Venice basin was used as the waiting point prior to entering Paddington Docks. In honour of the poet Robert Browning, who lived in this very neighbourhood, the basin was in years gone by named “Browning’s Pool”.

For much of the year, Little Venice is a tranquil and peaceful respite from the city life, particularly with the beautiful Rembrandt Gardens that were opening in 1975 – commemorating the 700th anniversary of the founding of Amsterdam – along with public walkways on both sides of the basin.

Little Venice really comes to life for the Canalway Cavalcade which is a two day festival featuring boat pageants, trade stalls, live music, morris dancing, and of course a whole host of culinary feasts ranging alfresco dining to street food! For the rest of the year, Little Venice offers a sophisticated and dignified time out, with boat trips and boat cafes that bring a welcome intermission from urban living.

From October to July, the Puppet Theatre Barge stages marionette shows which have been taking place since 1982! Home to a programme of unique and magical puppet shows for over thirty years, this intimate and truly individual space is definitely something for young and old to experience! 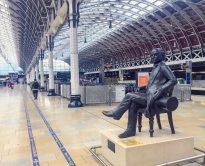 Paddington has witnessed many historic events over